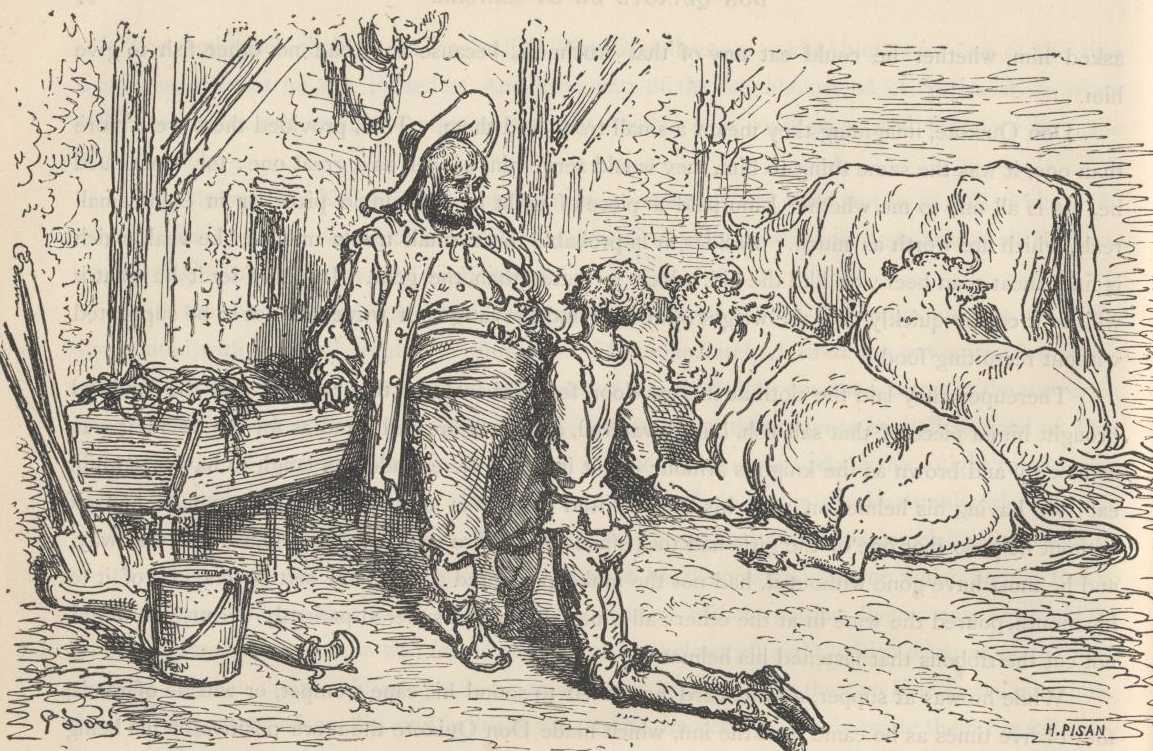 Harassed by this reflection, he made haste with his scanty pothouse supper, and having finished it called the landlord, and shutting himself into the stable with him, fell on his knees before him, saying, “From this spot I rise not, valiant knight, until your courtesy grants me the boon I seek, one that will redound to your praise and the benefit of the human race.” The landlord, seeing his guest at his feet and hearing a speech of this kind, stood staring at him in bewilderment, not knowing what to do or say, and entreating him to rise, but all to no purpose until he had agreed to grant the boon demanded of him. “I looked for no less, my lord, from your High Magnificence,” replied Don Quixote, “and I have to tell you that the boon I have asked and your liberality has granted is that you shall dub me knight to-morrow morning, and that to-night I shall watch my arms in the chapel of this your castle; thus to-morrow, as I have said, will be accomplished what I so much desire, enabling me lawfully to roam through all the four quarters of the world seeking adventures on behalf of those in distress, as is the duty of chivalry and of knights-errant like myself, whose ambition is directed to such deeds.”

The landlord, who, as has been mentioned, was something of a wag, and had already some suspicion of his guest’s want of wits, was quite convinced of it on hearing talk of this kind from him, and to make sport for the night he determined to fall in with his humour. So he told him he was quite right in pursuing the object he had in view, and that such a motive was natural and becoming in cavaliers as distinguished as he seemed and his gallant bearing showed him to be; and that he himself in his younger days had followed the same honourable calling, roaming in quest of adventures in various parts of the world, among others the Curing-grounds of Malaga, the Isles of Riaran, the Precinct of Seville, the Little Market of Segovia, the Olivera of Valencia, the Rondilla of Granada, the Strand of San Lucar, the Colt of Cordova, the Taverns of Toledo, and divers other quarters, where he had proved the nimbleness of his feet and the lightness of his fingers, doing many wrongs, cheating many widows, ruining maids and swindling minors, and, in short, bringing himself under the notice of almost every tribunal and court of justice in Spain; until at last he had retired to this castle of his, where he was living upon his property and upon that of others; and where he received all knights-errant of whatever rank or condition they might be, all for the great love he bore them and that they might share their substance with him in return for his benevolence. He told him, moreover, that in this castle of his there was no chapel in which he could watch his armour, as it had been pulled down in order to be rebuilt, but that in a case of necessity it might, he knew, be watched anywhere, and he might watch it that night in a courtyard of the castle, and in the morning, God willing, the requisite ceremonies might be performed so as to have him dubbed a knight, and so thoroughly dubbed that nobody could be more so. He asked if he had any money with him, to which Don Quixote replied that he had not a farthing, as in the histories of knights-errant he had never read of any of them carrying any. On this point the landlord told him he was mistaken; for, though not recorded in the histories, because in the author’s opinion there was no need to mention anything so obvious and necessary as money and clean shirts, it was not to be supposed therefore that they did not carry them, and he might regard it as certain and established that all knights-errant (about whom there were so many full and unimpeachable books) carried well-furnished purses in case of emergency, and likewise carried shirts and a little box of ointment to cure the wounds they received. For in those plains and deserts where they engaged in combat and came out wounded, it was not always that there was someone to cure them, unless indeed they had for a friend some sage magician to succour them at once by fetching through the air upon a cloud some damsel or dwarf with a vial of water of such virtue that by tasting one drop of it they were cured of their hurts and wounds in an instant and left as sound as if they had not received any damage whatever. But in case this should not occur, the knights of old took care to see that their squires were provided with money and other requisites, such as lint and ointments for healing purposes; and when it happened that knights had no squires (which was rarely and seldom the case) they themselves carried everything in cunning saddle-bags that were hardly seen on the horse’s croup, as if it were something else of more importance, because, unless for some such reason, carrying saddle-bags was not very favourably regarded among knights-errant. He therefore advised him (and, as his godson so soon to be, he might even command him) never from that time forth to travel without money and the usual requirements, and he would find the advantage of them when he least expected it.